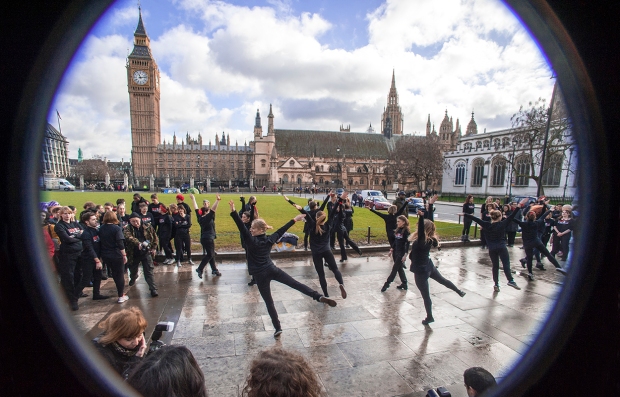 Today was hard. I had to get up at 6am to get everything done, which I only just managed, am fighting some kind of virus (have been for days) and felt really really ill. My bags felt heavier than normal (2 cameras, just 3 lenses and the laptop as the iPad doesn’t process images well enough for what I was doing) and there was no opportunity to rest. It was bright, which is great for the images, and cold which is not so good for me and there was so much to do that I didn’t get to drink or eat anything until around 4.00pm. None of this was helped by the fact that it was in the early hours before I was able to sleep because processing images from the London Cabaret Awards and OBR flashmob rehearsals took quite a while.

The dancers were fantastic! When officials shut down the generator powering the music I shouted to them ‘keep on dancing’ and those who had stopped and looked confused did exactly that, performing the entire choreography to their own counts! I took my shots and moved on as I needed to file the images and get set up for the next flashmob in City Hall. As I left John Snow was interviewing Marilu and Mimmo. They worked so hard on this and deserves the recognition that brought. I didn’t see them talk to Lourdes though, as the other choreographer I hope that she was recognised too.

It has been a really hard day, but wonderful. I’ll post more about what happened at the other locations and maybe some more behind-the-scenes stuff in the future. Right now I want to check the images are uploaded, have a hot bath and go to bed.

← One Billion Rising! Join Us!
The last rehearsal for the #1billionrising flashmobs →

One thought on “One Billion Rising: VDay flashmobs #1billionrising”