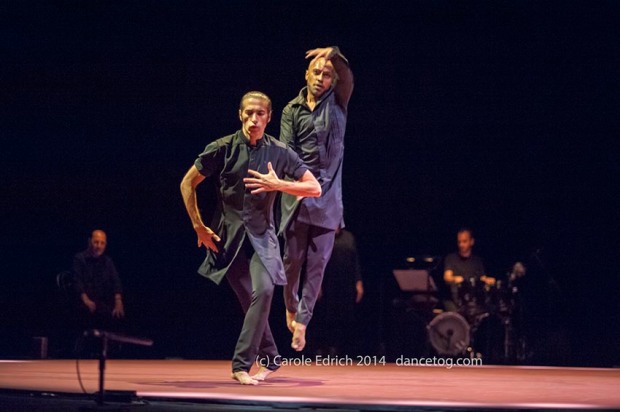 To say that the translator simplified Israel Galván’s words would itself be an oversimplification, so sadly those who had no understanding of Spanish would have struggled to get the nuances – or even a sense – of his words. Luckily, Akram Khan took up some of the translator’s ommissions for those who stayed behind for last night’s post show speech.

Not that any of that mattered. This long-awaited and much anticipated performance by two contrasting great dancers of our times delivered everything that could be hoped for, by those in flamenco and kathak communities as well as those who just follow Khan because of who he is.

This performance demonstrated the visceral potential available to those who strive to deconstruct and then reconstruct their performance. Music, percussion, voices and dance melded into an integrated symphony. Each performer’s essence melded; the mathematical preciseness of Akram Khan’s kathak, the deconstructed passion of Israel Galván’s flamenco worked, in seamless coordination with music, singing and palmas to produce a treat for the eyes, ears, mind and spirit in a way not seen before. 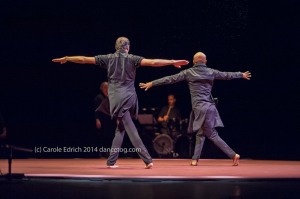 The two mixed humour with their atmospheric virtuosity, and the sense of play from both men really came across. Different sections of the audience laughed at different times, depending (I assume) on whether they related more to flamenco or to kathak. Like others in the audience this reinforced my decision to learn more about the dance I didn’t know.

So what that they didn’t deliver the new language as promised! In Khan’s words “we were working hard to create a third way [of dance, as opposed to kathak or flamenco] but then realised we didn’t have to search for something else. We had the revelation that we are so different that we had to develop what we were.”