I was surprised to read a declaration that Sara Baras had been ‘given the honour’ of starting this year’s Sadler’s Wells Flamenco Festival ‘because of the many and numerous honours she has been given in Spain’ in today’s Evening Standard. The statement is wrong in so many ways.

Whether you like her or hate her (which, surprisingly, some people do) she is an outstanding performer. As such she needs great venues as much as those same venues need her, so any honour cancels out. If anyone is honoured it is us, because Sadler’s Wells’ alliance with the much larger International Flamenco Festival has given us 13 years of Flamenco Festivals with a huge variety of flamenco in the some of London’s best and most comfortable venues.

Voces, Suite Flamenca is a strongly-felt homage to the artists Paco de Lucia, Camaron de la Isla, Antonio Gades, Enrique Morente, Moraito and Carmen Amaya. Their presence is evoked through huge portraits on panels with which the tightly choreographed company interacts, and through old recordings where they talk of the joys and pains of their art. 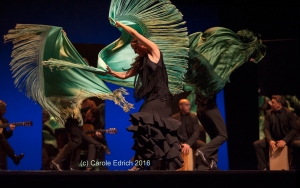 Baras is a percussive force who transforms as she dances and whose trademark extra-fast and perfectly timed zapateado, sharp clear gestures and heartfelt presentation is beautifully presented. There is no clear narrative, and Baras gives herself less reign for elaborate expressions than usual. This is presumably because, as an homage, the work must reflect the spirit of those to whom it refers.

Like all of her shows there’s a clear sense of theatre, the dresses are stylishly sharp and the performance a slick production that works well on a large stage. Sharp directional spotlights increase the atmosphere and the cantaors (particularly Israel Fernandez) transform as they deliver their words.

In general the production was enthralling rather than enchanting, and while it delivered exactly what we’ve come to expect from this versatile flamenca, the group choreography didn’t deliver quite as well. A representation of a scene from Carmen was either cut back at the last moment or unfinished because it lacked the coherence I’d expect of her work.

I was happy to see the performance twice and would have gone again had time and budget permitted. Her flamenco improves with watching, there’s always more dance to discover and by seeing it more than once you learn the choreographic points and how the individuals improvise around them.

My naively romantic assumption that Sara Baras’ eloquent speech of thanks and explanation was an impromptu outpouring was disabused on my second viewing but I still wish I could have seen it again.

← Master technique and then..
On seating and reviewing spectacular flamenco →