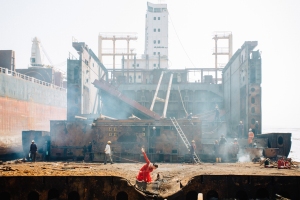 Manuela Benini is a choreographer, dancer, artist and photographer whose Red Dress Project is a series of photographs featuring her choreographic movement interactions within natural, architectural and industrial landscapes.

With Manuela finds local areas of interest by talking to the locals, and getting a local to take her photograph as she responds to the area and what she has learned is part of her evolving philosophy.

The Red Dress has travelled internationally since 2006 and the resulting collection of images are powerful evocations of gender, place and identity which addresses the complexities of tradition and the constant cycle of change, with particular attention to hardship and inequity.

You can see some of her images at Sadler’s Wells, as part of Akram Khan’s 2017 Darbar Festival, in which her interventions performed and captured across India include the vast landfill of Deonar in Mumbai, the industrial scale Aalang ship breaking boatyard as well as in the Kutch area of Gujarat and the Old Town of Ahmedabad. In this, her resulting photographic and performance interventions within these environments give a unique insight into the beauty and complexity of India in the 21st Century.

Manuela combines body weather, Butoh, Kathak, contemporary and afro-Brazilian dance in photographs that bring attention to some of the biggest issues on our planet. The exhibition is free and at Sadler’s Wells for the duration of the Darbar Festival.