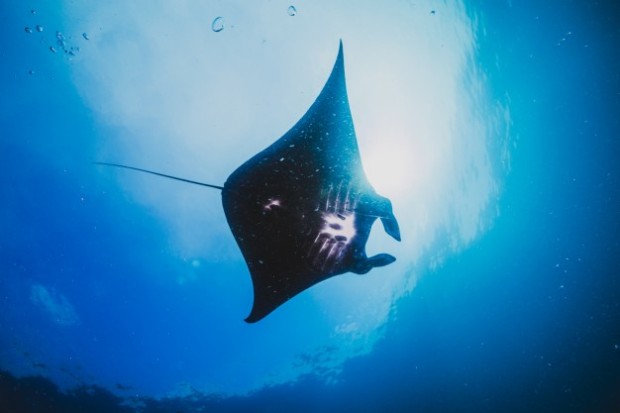 On the way to snorkel with reef sharks and turtles in the Maldives, our pilot called us and pointed, turning the boat. We strained to make sense of large patches of darkness with occasional flashes of white under the reflecting surface of the waves. Slowly we realised they were manta.

I was the last to slide into the water, determined to head away from the group. All that splashing and shouting would surely scare the sealife. I swam as quietly as I could, hoping the adventure would pay off.

After a while I was rewarded. A huge manta came towards me. Its cavernous, white mouth gaped to reveal lateral mouthpieces like floppy rhinoceros horns. This muscular, wholesome diamond-shaped being, so much larger than I had imagined, glided to my side and then disappeared. Another appeared directly beneath me, flipping to reveal a huge ivory-white underside. Spots on its wings enhanced by the glittering plankton, it looked like dark stars in a white sky around long dark Christmas-tree-like gill slits. Righting itself, it undulated with a sinuous, effortless grace into the sparkling cloudy sea.

As I turned back towards the others I sensed something to my right. An even bigger graceful, beautiful power-packed manta, with a wingspan greater than my height and a surreally supple incredibly long tail. l swam and watched. I felt privileged that such an elegant creature should chose to swim just an arm’s length from me. The dream-like clarity of the experience drove all thoughts from my mind, leaving only awe and respect.

Then I realised that just ahead and slightly below me was another, smaller manta with a subtly dappled back. Describing the same strong, sinuous sine waves it curved away from the reef. Entranced, I followed, and realised that another was keeping pace to my left. While moving my head to look at the giant on my right, I found yet another directly below me! It seemed even bigger but this might have been a trick of the light. Wondering if I was in a school I looked behind to discover another was following me. They’d never believe this back home!

The idea that these creatures had somehow adopted me filled me with a sense of joy. Even now, 15 years later, it hasn’t gone. But the sea’s not my home. It suddenly occurred to me that I was going with the tide out to sea and away from the boat. It would be very hard to swim back. I raised my visor out of the water to locate the boat. When I looked back they were gone.

This happened on Christmas day morning in the Maldives, the day before the Asian Tsunami. They say animals instinctively know just before a natural disaster strikes. I think they were trying to take me out to sea to protect me. Despite what happened after, this is a memory I treasure.

I timed this to land as close to the anniversary of the experience as possible. I’ve written and rewritten about the experience many times and in many ways for many different publications. It was an important experience for me, even though the tsunami itself was not. A lot more happened around the time of the Asian Tsunami. Maybe one day I’ll share more.